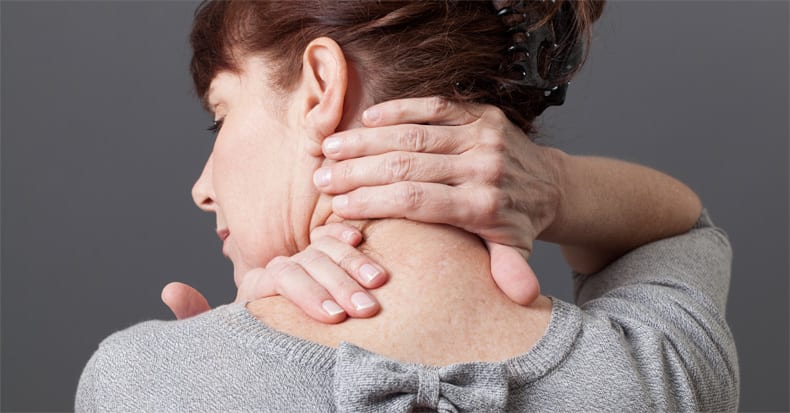 The terms “whiplash” and “neck strain” are often used interchangeably, though there’s debate about whether this is appropriate. Let’s take a closer look at the differences between these two common descriptions of neck pain…

The term “strain” technically means a stretch injury to a muscle and/or the tendon that attaches muscle to bone. The terms mild, moderate, and severe offer a classification approach commonly used by healthcare providers to describe the degree of injury. As implied, a mild strain is just that—little to no muscle fiber or tendon tearing has occurred and thus, the injury will have a faster recovery time than a moderate strain. Moderate strains include partial tissue tearing and take longer to mend. Severe strains described complete tearing and in certain muscles in our body, surgery may be needed to repair the tear.

There are many muscles and tendons in the neck that overlap each other to allow for various functions or movements to occur. The deep “intrinsic” muscles are described as “fine movers” and allow for the individual cervical vertebra to move in a very specific manner and direction. The superficial muscles are larger, stronger, and utilized in global/large movements and help to protect the neck and the deeper, more delicate structures.

It can take a total of about 600 msec for the head to “whip” forwards and backwards in a classic rear-end collision, which is faster than we can voluntarily contract a muscle. This explains why an injury is difficult (if not impossible) to avoid in a motor vehicle collision, even if you “see” that an accident is about to happen.

To further differentiate the whiplash injury from a simple muscle strain, the brain is suspended by ligaments and cushioned further by fluid inside the calvarium (or skull) and can easily get bruised by literally slamming into the walls on the inside of the skull in a whiplash injury. This results in “traumatic brain injury” (TBI) or concussion. Interestingly, it’s been reported that one does NOT have to directly hit the head on a hard object to suffer TBI.

The symptoms associated with TBI include mental fog; fatigue/tiredness; slow mental functioning, such as having difficulty formulating thoughts, staying on task, and/or expressing one’s self; visual complaints; memory loss; and/or headache. The term “Whiplash Associated Disorder” or WAD is preferred, as it encompasses the many different symptoms associated with whiplash.

Doctors of chiropractic are trained to evaluate, diagnose, and treat patients who have sustained a whiplash injury. Generally, the sooner treatment commences after the injury, the more favorable the outcome or prognosis. Therefore, don’t delay in obtaining care following a collision!

Women with Back Pain… The Silent Majority? Part 2Chiropractic Care vs. Medication for Neck Pain